The Imbus Roofing Co. was founded by Henry Imbus in 1873 as a stove store and tin shop on fifth street in downtown Cincinnati.

Ed Imbus came to work for his father and purchased the Stove Store and Tin Shop from Henry Imbus in 1910. Around 1920 Eugene Imbus came to work for his father, Edward. During the Depression era the stove store was not a profitable operation so Eugene Imbus closed the stove store and devoted all his energy to the tin shop and roofing business. In 1950 Eugene incorporated the business as The Imbus Roofing and Sheet Metal Company, Inc. In 1946 Eugene Imbus, Jr. came to work for the company and assumed the presidency in 1961 after the death of his father, he served as president until 2008. James Imbus, son of Eugene Jr. started working at The Imbus Roofing Company in 1976, and served as president from 2008 until 2013. Prior to working full time at Imbus Roofing, James obtained his Associate’s Degree in Architecture from the University of Cincinnati while working part-time and summers at the Business driving trucks, working on roofs and doing tinwork. Daniel Imbus began working at the company in the summers throughout high school and college and began working full time upon graduation in 2004. He assumed the presidency in 2013 after the death of his father and has run the company through present day. 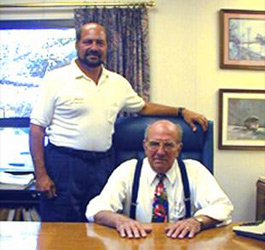 The Imbus Roofing Company has a proud history of involvement in the Cincinnati community through leadership in several building associations. In 1929 Ed Imbus ran for City Council under the Charter Party and was elected. In 1932 he was then elected and served as Vice President until 1937 when he retired from Council. Eugene, Sr. served as a Director of Allied Construction Industries representing the roofing contractors. Upon the death of his father in 1961, Eugene Imbus, Jr. was appointed to the Board of Directors of Allied Construction Industries and was elected President of ACI to serve from 1967 to 1969. Eugene Imbus, Jr. also served with the Construction Advancement Program (CAP) of ACI. James Imbus served as a member and President of the Greater Cincinnati Roofing Contractors Association in the mid 1990s. James also served on the Board of Directors of Allied Construction Industries and President of ACI from 2005 to 2007. James Imbus received various commendations from Architects, including Glaser & Associates, for his part in designing the metal roof system on the extended window at the Cincinnati Art Museum. He also worked with the City of Cincinnati Architects and the Planning Commission for re-roofing the tile roof on the Cincinnati City Hall.

The Imbus Roofing Company is very proud of the work we have performed in the City of Cincinnati. We also feel honored by the number of Architects in Cincinnati who call Imbus Roofing for suggestions with complicated projects or when they are planning the restoration of an historic landmark.